Ok, I know some of you guys have probably had this interface for the past couple of weeks already, however it has only just appeeared for me and I’m kinda annoyed that it has. I can understand why there have been some design changes, but the first thing that really struck me was the similarity between the new Google results page, and the existing Bing results page. Like seriously, of all search engines, you go and copy Bing….

No, its not just my imagination and I’m not just being a closed minded person and not accepting change and what not. What I’m talking about is almost a straight up copy of Bing’s search result page of which I have conveniently placed below. 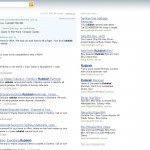 Below is a screenshot of the newest Google interface for thoes who hasn’t gotten the privledge of access yet. 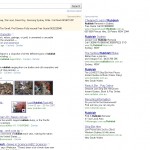 Now, you be the judge and compare that to the new Google interface, the similarity is beyond just a logical design choice, its seriously a blantant copy. Worse of all is that Bing’s interface is cluttered and annoying, so why would Google copy them? Why don’t we have a choice of hiding the left panel? The ability was there to show and hide that section previously, why remove it and force users to see the useless bar? Heck, I don’t use Bing because of how cluttered and ugly it looks, now Google jumps in and copies Bing? Like seriously, what the heck man.

Anwyays, let me know what you guys think about the new Google SERPs, I for one rather the old version, simple yet effective, however I could be the only one who feels this. Personally, I think alot of peopel would get annoyed of the change.